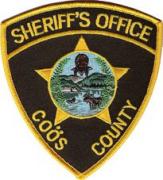 The Coös County Sheriff's Office is a law enforcement agency headed by an elected sheriff. The high sheriff is assisted in his duties by deputy sheriffs who he appoints and who serve at his direction.

The Coös County Sheriff's Office is responsible for serving all legal writs, providing security in Coös Superior Court as well as in the district, family, and probate divisions of the First Circuit Court. Transporting incarcerated persons to and from courts, county jails, state prisons, hospitals, medical facilities, as well as transporting juveniles to the Youth Development Center in Manchester.

Fugitive apprehension within the state of New Hampshire and rendition/extradition of captured fugitives from beyond state borders. Providing secure transport to the NH State Hospital, juvenile facilities and other locations as directed by the court. Assisting other law enforcement agencies as needed.